Sing for Hope has partnered with Puerto Rico-based theater collective Y No Habia Luz to bring art, hope, and essential materials to Puerto Rico in the midst of over 1,000 earthquakes felt in the first weeks of 2020. The island of Puerto Rico, still rebuilding from the devastation of Hurricane Maria, has been hit by a weeks-long barrage of earthquakes so severe that they have baffled scientists. Puerto Rico’s population of climate refugees has grown to over 2,000, with at least 30 emergency shelters popping up across 14 municipalities in the south of the island. Locals report that not only has the danger forced them to sleep in camps outside, but the camps stand on broken, flooding streets. In some cases, the few things people had managed to salvage from their homes have since been taken by rain and floods.

Though Sing for Hope’s existing work includes bringing creative relief to longer-term refugee populations (our first initiative serving refugees launched in Greece), the refugee population in Puerto Rico is relatively sudden, rapidly growing, and not yet widely known. The ongoing earthquakes barely cut through the news cycle, let alone their lasting effects. Sing for Hope found in our cultural partnership with PR-based Y No Habia Luz a way to respond immediately and sensitively to this severely under-resourced displaced population, called “Mother Nature’s refugees” by the Washington Post. Now, Sing for Hope (SFH) and Y No Habia Luz (YNHL) are partnering to use the arts to create an environment of healing where it’s needed most. The program provides hope and creative release, along with tangible necessities like water, clothing, and books, for individuals and families who have suffered unimaginable upheaval since the first quake hit on December 28th. And it does so in a collaborative way that upholds the culture and dignity of the Puerto Rican people.

Using a targeted workshop plan co-created by SFH Director of Artist Engagement Joel Guzmán and YNHL Executive Director Yari Helfeld, the YNHL team traveled to three communities in Guanica, the epicenter of the earthquakes. The workshop plan was designed with extreme sensitivity to the needs of people forced into a state of constant chaos and emergency. Through creative workshops, participants begin to rebuild an environment of safety and trust. The work focuses on creating a sense of stability, of feeling grounded—critically important for people who have quite literally not been able to trust the ground.

Next, the artists led participants in a dramatized reading of the book Centinela de Mango, portraying how Puerto Ricans have passed through adversity to come together and make a better Puerto Rico. This message was particularly poignant given YNHL Executive Director and SFH Artist Partner Yari Helfeld’s assessment of the situation in PR: “This is not a one-day situation; it’s not even a one-week situation. This is not like after a hurricane when you know it’s safely gone. Every single day now feels like the day after Hurricane Maria hit the island.”

The YNHL artists followed the shared experience of Centinela de Mango with a puppet-making workshop, providing the creative tools for participants to tell their own individual stories. Each person created their own paper puppet and practiced using it to communicate their emotions.

Puppetry, an ancient art form believed to have been used as a communicative tool for over 4,000 years, has proven therapeutic benefits. CBC News reports, “after Typhoon Haiyan smashed parts of the Philippines in 2013, puppeteer Amihan Bonifacio-Ramolete realized that puppets were a safe space for traumatized children—who had seen too much death and too much destruction too early in their lives—to find words to put to their feelings.” Y No Habia Luz and Sing for Hope find puppetry to be an essential healing tool for all ages, with multiple generations of families making and using their own puppets together in the workshop. 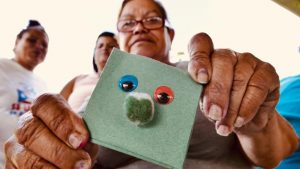 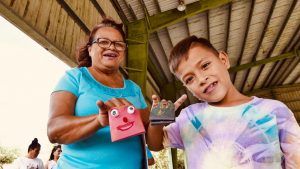 “When you take something really difficult and dark, like what these people are experiencing in Guanica, and turn it into a story—which puppets help us tell—you’re able to look at that horrible experience,” said Helfeld. “When you use story, you dramatize your reality and put it in front of you where you’re able to work with it. The arts allow us to liberate our stress, our burdens, the negative impacts and weight we carry. They offer a release. At the same time, the arts allow us to communicate the very real things we think and feel.”

Once these successive arts exercises opened up space to explore and express the reality in Puerto Rico, the workshops culminated with open forums in which participants were encouraged to talk about their experiences. The participating artists report that it was deeply emotional to connect with the refugees in Guanica—everyone from energetic children to older adults who were bedridden—and that many reported that it felt like the beginning of the healing process for them.

In keeping with evolving research, the YNHL and SFH artists find that creative arts-facilitated healing may be more accessible in moments of extreme tension than purely direct mental health intervention. “With theater games, we can play, I can make you laugh, you can make ME laugh, we can cry together. We share the space together,” says Helfeld. Theater games and other arts-based tools create a reciprocal relationship, while traditional medical or psychiatric intervention—though essential—can feel one-sided, with clear divisions between patient and doctor. For a period of time, the arts can bring everyone, ”professional artist” or not, into the same space. We are honored to be trusted to share that space with the brave people of Puerto Rico.

We know these needs will only grow with time as the news cycle fills with other needs and people around the world consider the earthquake crisis “over.” YNHL Artist Partner Yari Helfeld assures us that Puerto Rico remains in chaos, with aftershocks still continuing, massive physical destruction, and trauma that will take years to heal.

Want to help Sing for Hope and YNHL bring more creative intervention and emergency relief to the people of PR? Donate here.

Learn more about the earthquakes in Puerto Rico at https://suministrospr.com/

Sing for Hope has long worked in public schools, with 200+ SFH Pianos in schools and 50+ assemblies every year, Sing for Hope is further…

Sing for Hope recently received our second six-figure grant from a Europe-based foundation to replicate our programming overseas, with a focus on the creative arts…

Sing for Hope is proud to announce an exciting new Cultural Partnership Program that supports NYC-area arts organizations in their efforts to increase reach, diversify audiences, and…

Re-posted from Thrive Global: The turn of a year—or a decade—makes evident that humans love to reminisce. Just take Instagram’s Top Nine, or Spotify’s Decade…